I invited my mother to Mexico and we went together. We breathed the salty air under navy blue clouds on a beautiful red-flagged beach, bracketed by hurricanes.

She had stayed with me in the hospital for two nights while I recovered from surgery. “The last time we stayed together in the hospital was when you were born,” she said. Now we walked on the beach and waded into the ocean in between storms, and when we weren’t on the beach we filled our plates with tasty food and listened to the waves.

We breathed some more.

We visited Chichen Itza on the day of the fall equinox — one of two days when the shadow of a snake appears on the side of the pyramid and connects with an ancient carved snake head at the base. We saw the shadow start before it clouded over and rained.

That was in 2013. The Mexico trip acted as a sort of springboard. My friend and I kept our plans and went to Key West in January 2014. Then some classmates of mine started a writing retreat in Italy and I went in September. By that time I was completely restless, wanting to move back to the west coast where winters wouldn’t keep me shut inside — I wanted to be outside more, to get more exercise, to get more Vitamin D. But I also liked being near family in the Midwest. And I needed to keep working, and I wanted to keep traveling. 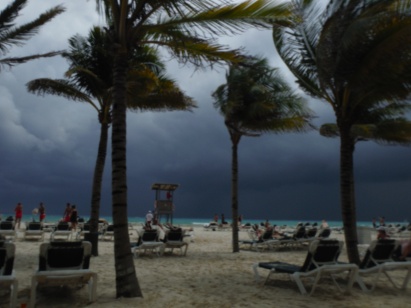 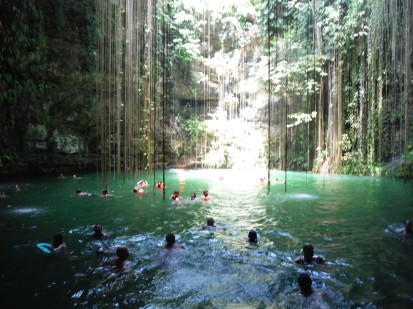 Maybe I was putting out some serious travel vibes to the universe. Maybe it was a some kind of karmic consolation prize. But just a couple of weeks after my second surgery in 2013, I won a trip to Mexico.

It was at one of those business expo things. The organizers had set up a fun little way to get people to talk to the exhibitors — a “passport” that you’d carry around and get stamped at each exhibit. Get twenty stamps and you could enter the passport into a drawing for a three-night trip for two to Mexico.

I was determined to win that trip. That was my trip.

He was wrong. I was right. And I didn’t even have to be present to win. I left for a doctor’s appointment and later that day noticed a bunch of voicemails and tweets.

Yay! How cool was that? My real passport was about to get stamped, for the first time in more than a decade.

And now, instead of questions like, “How long do I need to keep these drains in?” and “Why is my skin graft turning black?” the big question was “Who wants to come with me to the beach and sip umbrella drinks?” 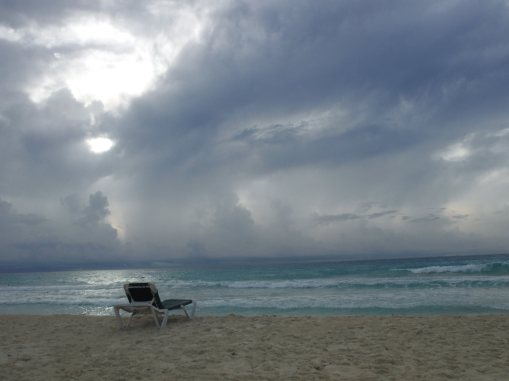 On the floor in a weirdly empty part of the Denver Airport, where a few other introverted Mac users and/or dead-tired travelers have found some quiet space. It’s a five-hour layover for my connecting flight to California, where I’m emptying out my storage unit, which I left behind in 2008. (Storage Wars terrifies me because I always think they’re going to auction off my unit). I’m selling my own stuff, thank you. My fundraising project: a cancer survivor volunteer trip to South Africa. Like A Fresh Chapter founder Terri Wingham says, it’s a big audacious dream.

Best kind there is.

Two years ago yesterday, the day before the Mayan calendar ended and we waited for predicted apocalypses, I learned that I had early stage breast cancer. A few days earlier I’d had my first mammogram, supposedly routine. (Note to every over-40 female: Do schedule a mammogram. Don’t do it a week before Christmas.)

An early-stage cancer diagnosis quickly became more complicated when I learned I carried the BRCA-2 gene mutation, increasing my chances of a recurrence.

I could only process the next two months through metaphor: I was stuck in a house of horrors, trapped with a serial killer and a lot of sharp objects, forced to make impossible decisions about my fate. A Jigsaw Killer victim, thrown into a twisted game of ‘would you rather.’

And suddenly my body wasn’t my own anymore but the territory of a team of professionals, one step removed from my humanity, knowing that so many others had gone through this but still feeling like I was the only one. Like being encased in a moon suit and tethered in a tenuous orbit of despair.

I needed something to look forward to.

Just before the diagnosis, a friend and I had planned a Key West vacation for the following year to A.) Go someplace warm in winter and B.) Visit the Hemingway House and dozens of hemingcats. Despite mounting medical bills, I was determined to hold onto that trip.

We stare at images of my breast
faceless to each other

The shadow of a snake appears
on the temple of sacrifices

My wandering soul dawned at young age amid messy piles of National Geographics and pink-and-yellow atlas pages. I’d spin globes to see what the world turned up. I daydreamed. I was an Indiana Jones-girl, adventure girl, a space girl. I was Luke Skywalker’s sister before I knew he already had one. I rescued galaxies and vanquished enemies. I started writing my stories down.

When I got older I traveled, less than I’d planned but as much as possible, seizing opportunities whenever I could and creating others. I went as far as Saudi Arabia, Uzbekistan and Egypt. I collected photos of myself in iconic places — under the Eiffel Tower, in a London phone booth, on a camel in front of the Great Pyramids. Regular life got in the way too much, though, and suddenly it was more than a dozen years since I’d had a new stamp in my passport.

And then I was diagnosed with cancer.

That’s when I went to the moon.